It has been a while, hasn’t it? I ended my last blog on December 22, 2017 by saying Christ has brought me through.  He is still carrying me. It turns out that as the pain revved up in my back again after the ablation I was told it could take up to 6 weeks to get relief. Six weeks came and went.

I only got what I perceive as about 30% success. The pain is still heavy but it is dull not so sharp as before the procedure. It limits me significantly. My doctor at the pain clinic has me scheduled for another procedure on April 5 to calm a nerve that is causing much of my pain.  From what I have read, this procedure helps 50% of those who do it and for those 50% it can last from one week to one year. Not good odds but when you are suffering, you will reach for any straw.

My right hip has been bugging me for quite a while but I didn’t think it was anything serious. Since January, however, the pain has increased significantly. The hip is giving way on me much more often. I rarely go out without a wheelchair because my hip may cause me to stumble at any time.

We are now preparing for a total hip replacement in April after the back procedure.

I have the world’s greatest physical therapist. He is my age and has known pain himself so he goes at it gently. “It” being exercising and kneading the muscles that support my back and hip. My favorite parts of the session are the ultra sound and electric current.

Judge took off five weeks this year through the family care act (Is that what it’s called?) . It is the federal program that guarantees him a job when he returns to work. With my back and my hip as they were, I could not care for myself. I couldn’t even do crafts or hobbies to pass the time. Crying and moaning? I had plenty of time for those activities. Financially it has been rough. No work, lots of  medical bills.

My mom moved into assisted living in October of last year but her dementia progressed rapidly. In January she was put into rehab because of some falls but she was unable to advance very much. She is now in a good nursing home. It is a short walk from our front door (for Judge not for me!). I am so glad we are able to keep her close. She still knows us, loves to get her hair done and listens to Elvis. When I visit I always ask her if she knows me. Last week she said, “Why, yes.” “You’re Judge Pippin’s wife.”

Life can change so quickly.  2017 was a year of increased pain and personal chaos. I am praying that ’18 will be a year of healing and peace.

On a younger note, Eli turned three in March. We with family and school mates celebrated at Premier Athletics. Emmy will be one on Easter Sunday. They bring us so much joy! Seth and Mallory are such good parents. My younger son, Stephen, will graduate this spring. He has worked his butt off putting himself through college. We’re really proud of him! 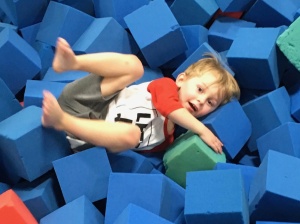 I don’t know what I will do about the blog. At least for now I thought it would be a good way to catch you up on what’s going on with us.

It seems like a litany of physical complaints. But God is growing us up just like the daffodils in my front bed. Through the cold and snow those daffodils continue to hold their heads high.

2 thoughts on “Catching Up”

The Lord directs the steps of the godly. He delights in every detail of their lives. Psalm 37.23

I am a lover of God first. I am a wife, mother, colorist, and blogger. In addition to gazing into the ocean, another one of my favorite things is shop year round to fill all of our very large Christmas stockings. They are a big deal to us! And it excites me to know that even this small thing is something God will delight in when I live for Him! What do you like to do that pleases God?